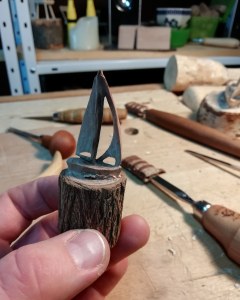 We all start somewhere. We all practice. We all have our reasons to practice.
When your technique improves, it helps you achieve your goals.

For instance, when you can play scales on the piano without errors, or saw to a saw line without going off to the side, it lays a good basis for successful creation.

Technical expertise comes in handy when you want to create something, be it learning a new piece on the piano, or building a Whiskey cabinet with 150 dovetails.

If you don’t remember these original inspirations that drove you to go through all that effort, you may end up just practicing scales – but super-fast.
You may end up making sculptures in a traditional Southern-German style – because your sculpting teacher told you so.
Or you may end up just riding your boring city bike from point A to point B – without doing any BMX tricks at all.

And that would be a pity.

To avoid this loss of inspiration, I have made it a habit to write down any idea that comes to my mind. Not matter how silly, weird or impossible it seems. I don’t put pressure on myself except to outline the idea as clearly as possible.
I therefore have a big collection of paper notes, scribbles and drawings.

Sometimes I go through my notes and find an idea that was previously impossible to execute due to lacking technique, tools or knowledge but has now come into my reach due to my increased skills.

When I first started whittling wood with a pocket knife, around 2014, I had an idea for a sculpture. I wanted to carve a sail boat. Not a still model but a sail boat on the water leaning to the side in the wind, the sails bulging, waves around the bow. A very lively scene with lots of movement.
Somewhere later that year I attended a two-day woodcarving workshop and on the second day I pitched the idea to the teacher. I sketched the sculpture and he just stood there and grinned ‘’good luck buddy, that’s way too hard for you’’.

So I made a lizard instead on that day.

My technique and skills were obviously lacking at the time. But I did not forget the idea of the sail boat. Some months later, after much carving practice and making many sculptures, I decided to grab a piece of birch wood and came up with something that was close enough to the inspiration I originally had.

I made many more of these in the months that followed, each one a little closer to the idea I had in my head.

I have piles and piles of sketches, ideas, drawings. A lot of them will probably never be executed. But I keep them around and go through them from time to time.

If anything, I can have a laugh at some silly ideas I had when I was younger.

Exploring the joys and frustrations of (mostly) hand tool woodworking.

Maker of Sculptures and Chairs

For anyone working wood by hand

Woodworking without the loud noises

Just trying to leave something behind.

In which 1snugthejoiner writes about woodworking, publishing, house renovations, cats and Shakespeare (don't worry – that last one is rare).

Making what I need with my hands.

Fair Woodworking
Over the Wireless